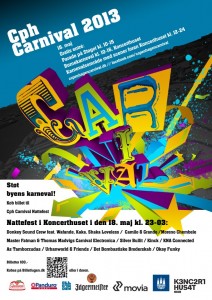 See A Banda and many other samba groups, plus music, food and entertainment from all over the world throughout the Whitsunday weekend at Copenhagen Carnival 2013. As with previous years, there will be a big parade through the center of Copenhagen on Saturday morning, but this year, the party continues in around the Danish Radio television studios on Amager (rather than at Fælledparken).